I’m some 70% sure that I’ve actually stumbled into Cornwall somehow, rather than the south of Wales. Not only is the landscape, roads and even the smells, eerily similar, but today I also came across a delightful cafe that specialised in delicious Cornish-looking pasties.

With my tasty prize in hand, I descended upon my landmark for the day, Marloes Sands

Not much to write home about today, though I did enjoy dipping my toes in the sea for the first time since September. Plenty of pictures to share though.

Marloes Sands itself is a collection of white beaches and jagged slate stacks, the last remnants of an ancient coastline. On it’s western end lies Gateholm Island, a tidal island that is home to over one hundred roundhouses, built during the Roman era by local Britons.

Like much of Pembrokeshire, the coast has a dangerous past. This particular section of the coastline is known as the Jack Sound, a particularly treacherous stretch of water due to high and fast spring tides, as well as many lurking rocks. 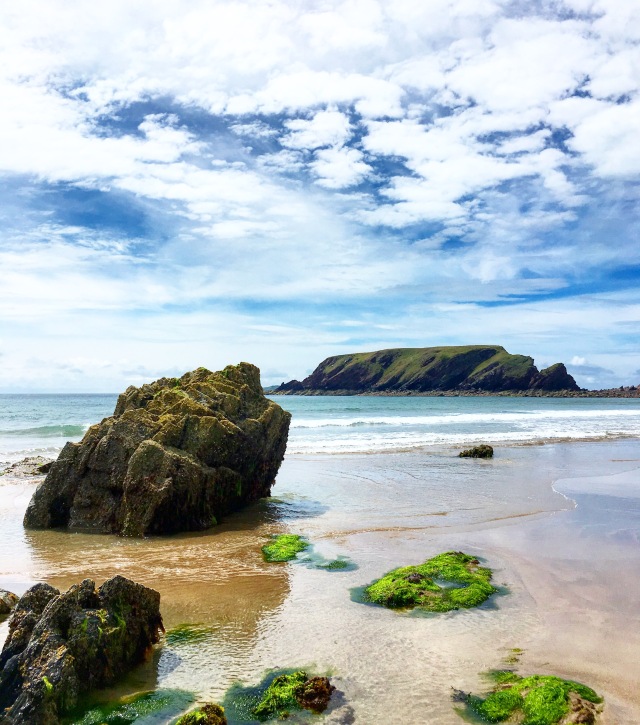 Further out at sea lies Skokholm Island, and if you’re think that sounds oddly like Stockholm, then you’re right as both places receive their name’s from the Vikings and mean roughly the same thing (wooded islet), though much like Stockholm today, Skokholm is pretty treeless.

Along the coastline, towards the headland where one can view the bird-blessed island of Skomer, are several coves and bays, my favourite being Deadman’s Bay, likely so named due to the mentioned danger presented by the Jack Sound.

After a long day walking across the cliffs and along the beach, we returned to Porthgain for a delicious and good-size portion of fish and chips (something I’ve sorely missed in Vienna) at the The Shed, with a clear, evening view of the village harbour. A perfect way to end a tiring day.