So for my dissertation next year I’ve decided to study the evolution of Sussex castles. Even though its a year away and I still have a year in Vienna to get through, I reckoned it’d be worth starting my research now. This means I’m using the summer to explore the breadth of Sussex in search of castles, both known and unknown, from great stone palaces too little earthwork mounds.

Seeing as I’m going to a lot of interesting places I’ve decided to share some of the sites I’ve visited on the blog, though not all of them, as some of them rest on private ground and I often require permission to reach them. So in order to not encourage anyone to trespass I’ll probably be leaving those ones out of these posts.

Bramber Castle is probably one of the more well known castles in Sussex, built almost 1000 years ago, it served as the caput of the local district, known as the Rape of Bramber, which stretched from Shoreham to Horsham. The castle was the original seat of the Braose family, one of the most prominent early Norman families. The castle was intended to serve as an administrative centre from Rape of Bramber and guard passage over the River Arun. Back in those days the River Arun was a lot wider and boats could sail all the way up to nearby Steyning, which was a thriving port town at the time.

For around two hundred and fifty years the castle was held by the Braose’s, though it was briefly confiscated by King John after the Braose’s rebelled against him in the early 13th century. However it finally feel into the possession of the Mowbray family after the male line of the Broase’s died out, however it was in this period that use of the castle declined and by the 1500s the site was being used for grazing.

However new life came to Bramber Castle during the English Civil War when Royalist forces briefly  occupied the castle in 1642. The Parliamentarians responded by setting up cannons in the nearby castle church, built in 1075, and using the elevated position to fire over the ruined castle walls. As a result of the skirmish the castle was badly damaged and it is likely to have been further slighted by the Parliamentarian forces in order to prevent it from ever been used again.

After that Bramber Castle has been a ruin. Built on top of a natural chalk mound, the castle plateau offers a wider view of surrounding landscape, including the river Arun and the South Downs. Its protective ditch is now mostly eroded and filled in, though its still identifiable and you can walk all away around it. As for the castle itself there is still some easily recognisable remains, the stone curtain wall can still be seen, hugging the edge of  mound and the foundations of living quarters and the guardhouse are still there. The motte stands noticeably in the centre, though it has been eroded and there are no longer any stone remains on its surface.

However the castle’s most prominent feature is the remains of the gatehouse, which consists of a single wall, rising nearly to its original height of 15 metres, like a lonely monolith. It gives a great impression of how impressive this castle must have been in its golden years. 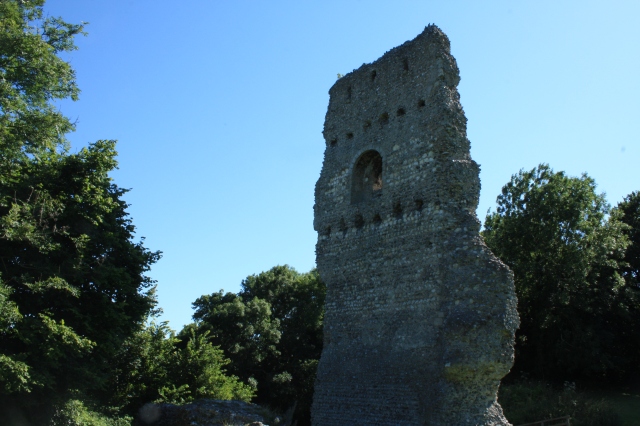 If you know of any hidden castles sites in Sussex, tell me in the comments below, I’d love to hear some of your knowledge.