Well I learned last night that internet is a bit dodgy here, but I shall persevere and try to keep uploading, but don’t be surprised if you don’t see anything from me for awhile.

Day three of our holiday and beautiful sunshine has returned to Northumberland. We wasted no time heading to our first stop of the day, Bamburgh Castle. We’d already taken several photos of this striking place, but now it was time to actually set foot inside the castle.

Bamburgh Castle is one of the oldest continually inhabited sites in the British Isles, evidence suggests people having been living on this volcanic outcrop since Neolithic times. In the Roman era the area was controlled by the Votadini tribe and once the Romans left these people took control of the entire north of England and installed their own kingdom, Gododdin, and Bamburgh (then known as Din Guardi) was their capital. 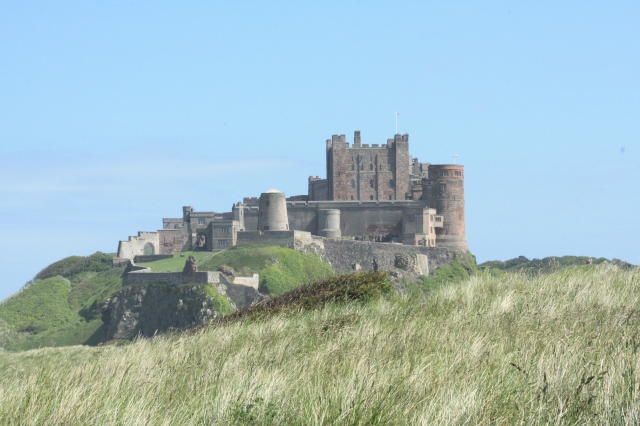 We approach the Bamburgh Castle

Yes little ants step forward a few more metres, I have you in my sights

This cannons were installed in the early 1800s

A bulwark against the threat of French invasion

Bamburgh has been heavily altered since its founding 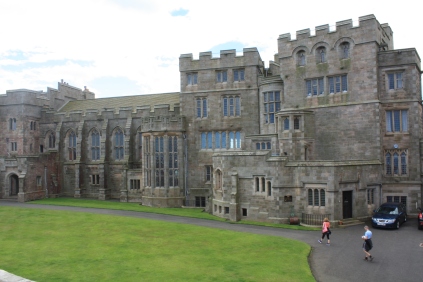 Though the Norman Keep remains

But the car-park is a recent addition

However this kingdom only lasted a hundred years or so before the arrival of the Anglo-Saxons proved too much for the native Britons and Din Guardi became the seat of the new king Ida of Bernicia. In 616AD Ida’s descendants conquered neighbouring Yorkshire, forming the great northern power that was the kingdom of Northumbria, while Din Gaurdi became its capital, and was renamed Bebbanburgh. Lovers of Bernard Cromwell and the BBC series Last Kingdom will recognise this as the home of the series protagonist, Uhtred of Bebbanburgh (great, now I’m hearing that series opener in my head again, ‘I am Uhtred son of Uhtred, I was born a Saxon but raised by Danes’).

The venerable Bede writes that there as been a fortress at Bebbanburgh since the 6th century, however the Vikings destroyed the original fortress in 993AD and this marked the end of the Kingdom of Northumbria. 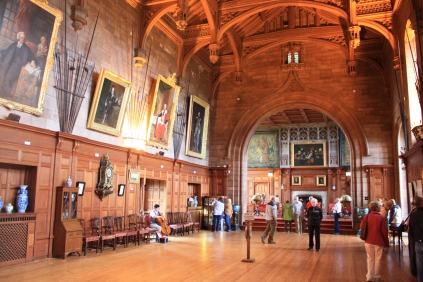 A violinist plays in the grand hall, very atmospheric

The Victorian lounge, sadly it was hard to get enough light for photos in the rest of the castle

Though the castle isn’t without its dingy hallways

A pair of knights guard the armoury

The Normans were the next to establish a castle on the dolerite outcrop in 1095, however they built their castle out of stone and today the Norman keep forms the basis of the castle. Bamburgh, as it was now known, then endured over 400 years of raids and sieges by the Scots and rebel lords. In 1464, at the start of the War of the Roses, Bamburgh became the first castle in Great Britain to fall to cannon fire.

The castle was heavily restored during the 18th and 19th centuries, especially after it came under the hand of Victorian industrialist William Armstrong, and who’s decedents still own the castle.

The outer wall of Bamburgh Castle

Excavations are still ongoing in the castle grounds

Next we headed out to Dunstanbrugh Castle, in comparison to the elegant Bamburgh, Dunstanburgh is now little more then a collection of ruins, straddling the Northumberland coast. Once the pride and joy of Thomas of Lancaster, who built had the castle between 1313-1322, today it is a shadow of its former self. Thomas of Lancaster, during his day, was the second most powerful man in the Kingdom of England, after King Edward II of course. Thomas though was a fierce opponent to the king and his favourite Piers Gaveston, it was on Thomas’s lands that Gaveston was eventually murdered. Following Gaveston’s death, England became embroiled in lawlessness and its likely that Lancaster built Dunstanburgh to serve as a bolthole when the fighting got too rough, as well as it being a powerful status symbol designed to challenge the king himself. However Thomas of Lancaster, who may never have set foot inside the completed castle was captured in an ambush whilst traveling to Dunstanburgh in 1322, and was subsequently executed.

The Lilburn Tower of Dunstanburgh

Named after early constable of the castle, John de Lilburn

Dunstanburgh for the nearby beach, an impressive sight even today

The castle straddles the cliff edge 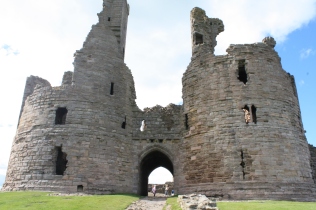 The castle then spent some time in the hands of the crown, who maintained it due to its proximity to the Scottish border, however in 1362 the castle was acquired by another prominent noble, John of Gaunt. Guant, ever unpopular among the masses, sort to create better protection for himself by constantly expanding the castle’s defenses including the creation of a outer wall and gatehouse. Afterwards the castle continued for many years in its role as bulwark against Scottish invasion and during the War of the Roses, the castle fell to opposing sides a total of five times, in part because of its fickle constable, Sir Ralph Percy.

These walls still stretch to the cliff line

Dunstanburgh is made out of the same local stone as Bamburgh

A nice place to put a caslte

The back of the ruined gatehouse

Inside the empty shell

Dunstanburgh’s walls still protect the castle, if only there was anything inside to protect

However the unification of Scotland and England ended the need for defenses on the northern border and in time Dunstanburgh crumbled away, leaving only a series of spectacular ruins and fine bird sanctuary. 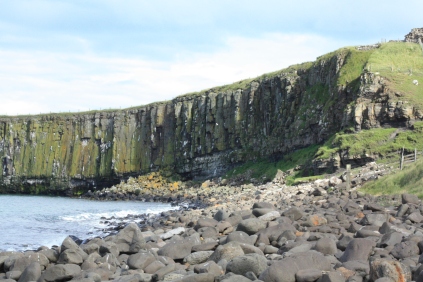 So named because of….well just look at their beaks 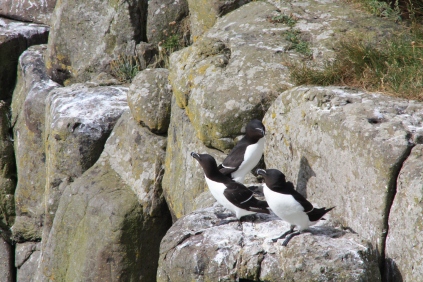 waves crash against the shore