Well it’s officially winter now and snow is starting to appear on the mountains, well I presume it is, I’m not actually sure since most of North Wales is currently under a few feet of water. Curse this endless rain… That being said I’m not in any hurry to go out mountain walking at the moment, so for today’s post I thought I’d do a flashback to a walk I did during the winter of 2014. (warning phone photos)

Mynydd Mawr means ‘big mountain’ in Welsh which is strange since Mynydd Mawr is actually one of the smaller peaks in Snowdonia, standing at only around 2,290ft. I much prefer its alternative name Yr Eliffant or The Elephant, so called since apparently the mountain resembles a sleeping elephant from the north side. Honestly, I didn’t see it. Mynydd Mawr does stand out though since it is a very isolated peak and, unlike most Snowdonia mountains, it is not part of a larger range; it’s just a little bump in the countryside. Therefore I considered it’d be ideal for a little snowy walk, I’d only just start climbing mountains on my own during the Summer beforehand and I’d been yet to tackle a summit in the snow so I decided this would be a safe mountain to start that on.

I parked at the little village of Rhyd Ddu, which is one of the principle starting points for mountain walkers, with paths leading up into Snowdon, the Nantlle Ridge and Moel Hebog. Walking up through the village, I came upon the forestry track that led up into the Rhyd Forest,where within my route onto the mountain lay.

It was a pleasant, if muddy, walk through the forest, with the track ascending at a very easy gradient and with the occasional great view of the back of Snowdon and Llyn Cwellyn.

However as time passed I began to get anxious that I’d somehow missed my turn off that would have led me up Mynydd Mawr and at the first available opportunity I veered left off the track and up a small path. In hindsight I shouldn’t have worried since my actual turn off was only around the corner. But instead I had to slowly slog my way up this  steep and swamp-like path. I eventually got to the top, which formed the base of Mynydd Mawr and was greeted with the beautiful sight of Llyn-y-Dywarchen and Y-Garn, the first mountain in the Nantlle Ridge. Also there was sheep upon sheep.

Sticking to the fence line, which seemed to mark the border between mountain and forest, I worked my way around the hundreds of sheep and came to style which herald the beginning of the slow ascent up Mynydd Mawr. So after some chocolate and a drink I began the hardest part of the walk.

In a way this is perhaps the best part of Mynydd Mawr, its a small mountain and most of the height you gain is done in one single rise. The path led steeply upwards and it was a hard half an hour of constant walking and stopping for breath. Fortunately the scenery around me was just getting more and more staggering, since most of the Nantlle Ridge was coming into view and I could see even further down the valley. At this point I hit the snowline and the path became rather icy so I was having to avoid the path and instead dig my boots into the soft snow to the side in order to pull myself up the mountain. It was all over fairly quickly though and I reached the ridge that would led me onto the summit. The view was amazing.

The mountain looked beautifully cold and frozen, every now and then the wind would toss up snow and it would drift lazily across the path in front of me. But the best thing was the colours, at this point the sun peaked out behind the clouds and bathed the mountainside in a golden hue. Looking across I could see incredible shades of brown, green, grey, blue and white splayed across Snowdonia. It remains perhaps one of the most beautiful sights I’ve ever seen. 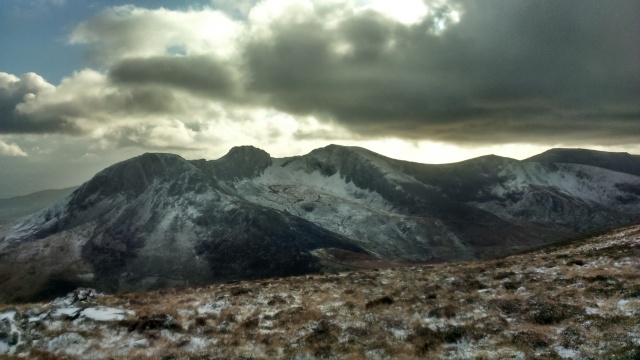 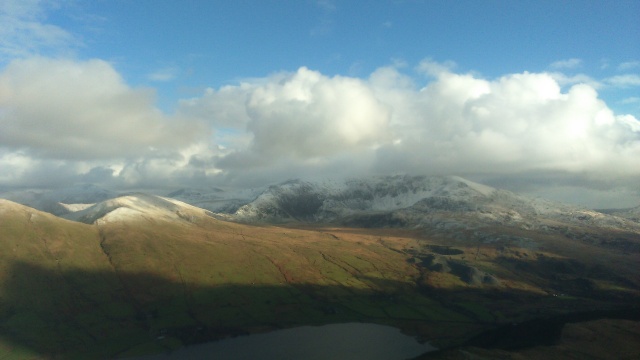 Following the rim of the mountain eventually led me to the summit and I settled down to have some more chocolate. Such an isolated mountain gave way for some extensive views. I could see all the way down the Llyn Peninsular, along the length of the Nantlle Ridge, Snowdon and the Moel Eilio Hills, to Anglesey and Caernarfon town, with its castle standing stark against the bright blue sky. At this point I realized I’d not seen a single other person on this mountain and looking at the undisturbed snow around me, I concluded not only had I not seen another person, I was the only person who’d been to the summit today; my footprints stood alone among the snowy landscape. 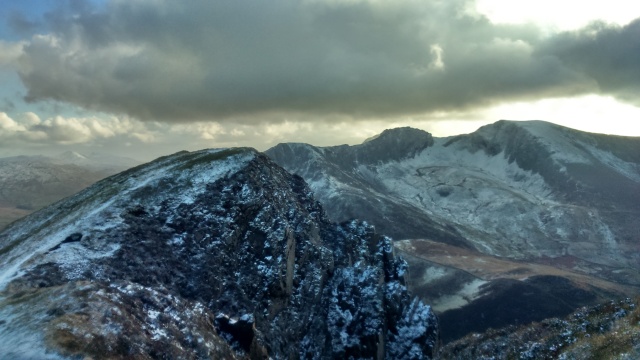 I headed back down the way I’d came, literally following my own footsteps. I took extra care during the steep section, slowly edging my way down mountain side and at the bottom I finally had some lunch. Not wanting to just retrace my steps I decided to head south towards Llyn-y-Dywarchen and then follow the main road back to Rhyd-Ddu. Moving my way back through the herds of sheep, I following the increasingly boggy path to the shores of the lake. 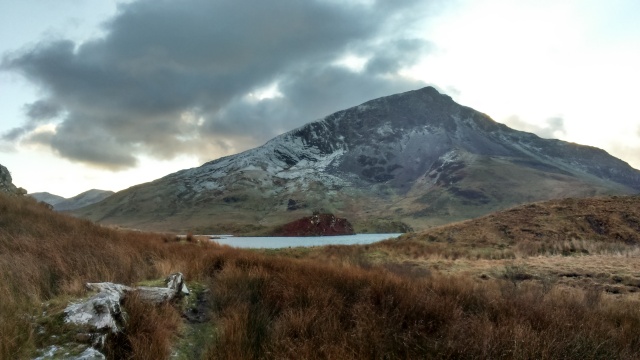 By this time it was getting close to dusk but the lake still looked beautiful in the evening light. Two swans that were drifting calmly on the water’s edge, took flight as I approached, besides them the surface of the lake was still and dark. Walking around the west side of the lake, I soon came upon the road that eventually led me back to Rhyd-Ddu and my warm, little car.

In all Mynydd Mawr was perhaps one of the most enjoyable mountain walks I’ve ever done, it was rewarding without being too exerting, I certainly didn’t feel at all shattered by the experience as it was a rather short walk in the end (it would have been shorter if I hadn’t spent almost an hour trying to fix one of my stupid gloves). On any old day people might consider Mynydd Mawr a boring and uninteresting summit, but for me, the snow and the beautiful scenery made this walk all the more worthwhile.

Thus concludes my tale, if you enjoyed this story feel free to write in the comments, or leave like and thanks for reading.