A continuation on from yesterday’s post about the Fairy Glen.

On Saturday I returned to the Fairy Glen with my parents, who had been visiting for a few days. As it was our last day together, I decided to take them for a very wet walk to the beautiful Fairy Glen Gorge. It was also an opportunity for me to try out my new camera lenses- an advantage of birthdays.

The last time I visited the Fairy Glen, it was at the beginning of Summer and rain had not graced the hills for weeks. However this time the rivers were completely swollen by the never-ending rainfall and the ground was littered with Autumn leaves. 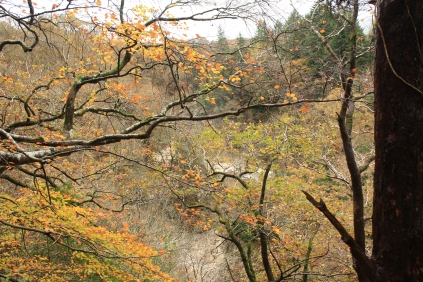 We began our walk at the Conwy Falls car park and then followed the forest path to the Fairy Glen, the River Conwy roared on below us, as the constant rainfall had transformed it into a angry, thundering torrent. Our path was constantly dogged by little rainy steams and deep mud, hidden beneath a carpet of red and orange leaves. 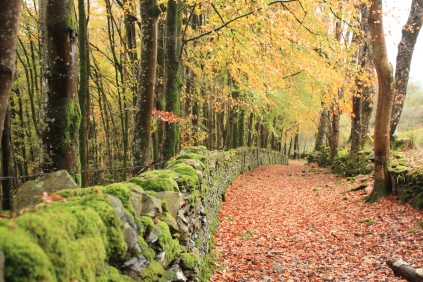 When we reached the Fairy Glen I was amazed and how different it looked. Whereas beforehand the river had been, for the most part, a gentle, if fast, current. But now the Glen was turbulent and violent, and filled with little frothy vortexes that swirled amidst the murky waters. 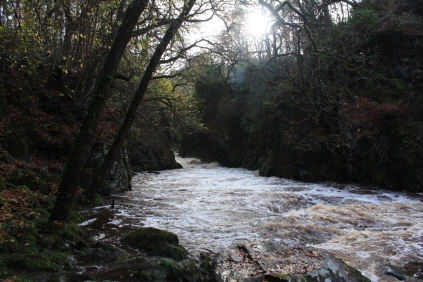 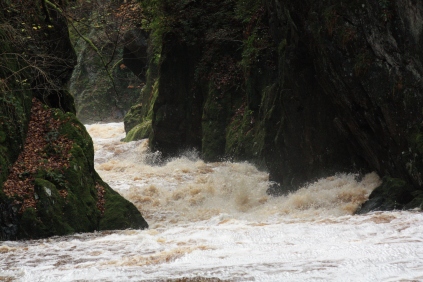 I had to be seriously careful when taking photos as I doubt I’d survive long if I’d fallen into that river. Just as we finished taken photos the rain began to fall much more heavily and we had to take shelter further up the river, luckily it lessened a little and we were able to make it back to the Conwy Falls and have some cake (and burgers) at the cafe. A real delight after such a wet day. 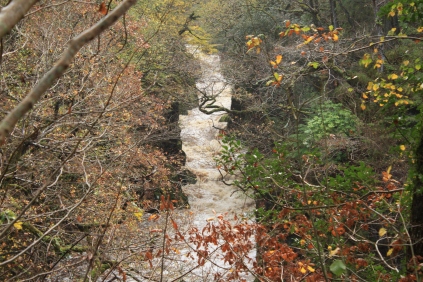